A man with a weapon poses in front of the trophies of his passion. The thing is, the hunted are images, the weapon is an object, a bricolage bazooka, and the hunter is a harmless neighbour.

The bemusing play of image realities, identities, misunderstandings, sex, crime and humour begins.
Oil paintings exclude ‘self-awareness or perceivable superficiality’. They are props and were especially made for this photo series. At first glance, the paintings show simple and pleasant scenes: unrestrained nudity suggesting naturalness.

Setting, composition and painting style support the first impression of harmony or harmlessness of scenes of a couple’s life. Actually, the content focalizes questions of gender relationships. Due to their pettiness, these gestures are often not questioned.

The paintings, however, have been brutally torpedoed by a man who most likely did not see an artistic or gender-specific discourse in them. The ‘perpetrator’ targeted the genitalia on purpose shot and left a void. Out of sight, out of mind. He is ostensibly satisfied with what he did.

The place of action is the microcosm in the courtyard of the studio. It is an experimental field for performative approaches in photography involving people from the environment who voluntarily become part of the action. Furthermore, this series highlights the relationship between painting/object and photography.

The project is part of one body of my work, called Simulation, which includes exclusively staged photography. 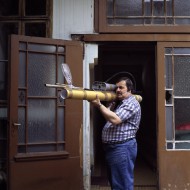 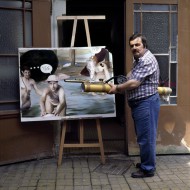 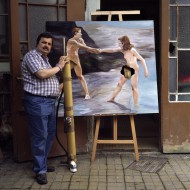 Horst Stein studied sculpture at the University of Music and Dramatic Arts Mozarteum Salzburg. Around 2000, he switched from sculpture and painting into the field of photography, which at first was a way of documenting his art, and then became the art itself. Consequently, objects and paintings were no longer just pieces of art, but also became props for art in a symmetric process.

His work is divided into two completely different bodies of art-photography: Simulation (combining various forms of art, incorporating staged photography) and Documentation (non-staged photography). The first approaches the issues of gender and sexuality, often in an ironic manner, whereas the latter focuses more on the society and politics.