Olaf’s inspiration for Dusk was the work of photographer Frances Benjamin Johnston. From 1899 to 1900, she photographed African-American students of the Hampton Institute in Virginia. Their life story at that time was still overshadowed by their lot as freed slaves. Through her sophisticated aesthetic style, Johnston showed to the world that, despite their dark past, a bright future is within these students’ reach.

Dusk is set at the beginning of the twentieth century and portrays an upper middle class, dark skinned family. The series gives the impression that the enlightened end of a long road to a liberated world has been found: a social paradise.

In Dawn, Olaf shows the same scenes, only this time the setting is Russia at the beginning of the twentieth century and, moreover, the palette is entirely pale. The inspiration for this work came to Olaf one morning in Moscow, where he was staying in a five star hotel. A white woman and her son entered the opulent breakfast room. Both of them were blonde and dressed in white clothes. As he watched them seated on white chairs, at a table covered with a white cloth, and surrounded by high, blank white walls, Olaf saw the counterpart of Dusk take shape before his eyes. And so Dawn became the aesthetic mirror to Dusk. 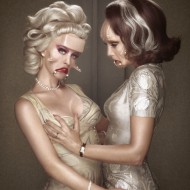 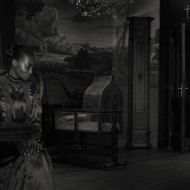 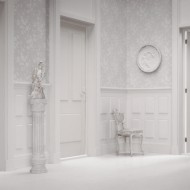 Mixing photojournalism with studio photography, Olaf emerged on the international art scene in 1988, when his series Chessmen was awarded the first prize in the Young European Photographer competition. This award was followed by an exhibition at the Ludwig Museum in Cologne, Germany. Since then, Olaf has continued to explore the issues of gender, sensuality, humour, despair and grace in his works.In 1991 he began working with film which has since continued to be an important medium for his art.

Recent monographs are Erwin Olaf, Aperture Foundation, New York, (2008) and Vite Private, Contrasto, Milan (2010). His worldwide campaigns for Diesel Jeans and Heineken won him the coveted Silver Lion at the Festival for Advertising in Cannes. He also won numerous other international art and media prizes, such as Photographer of the Year in the International Colour Awards in 2006, and Kunstbeeld magazine’s Artist of the Year of the Netherlands in 2007. Recently, he received a Lucie Award for his entire oeuvre.