In Sook Kim worked on her project Saturday Night for almost two years – from the initial idea to completion. Not one of the hotel scenes was invented by the artist; they are based on newspaper articles she collected over a period of months. Each room tells a different story. Artistic intervention or interpretation only occurred when the artist selected the special moment to be presented, along with the light and the colours for each room. A sense of deep calm emanates from every room, so the viewers relax their gaze and let the drama inherent in the photographs slowly unfold before them. Nothing is obviously brutal, ugly, or cruel. Some of the characters are very ordinary people playing either their everyday or Saturday night roles.

In Sook Kim captures an event with a camera and thus provides the chance to see it again and again: “I capture the moments that others fail to see and remember, and so I offer an opportunity to take another look at something they might have missed. For me, art is not just a higher level of perception, but a form of communication. I observe people and their position in society, the ways they alter, and I ask questions about the things I don’t understand.” 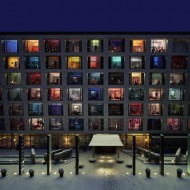 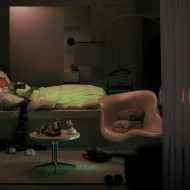 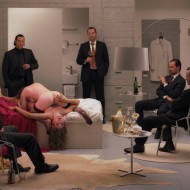 IN SOOK KIM
born in 1969 in Busan (Korea), currently lives in Germany

In Sook Kim left Korea in 1999 to study art abroad. She was accepted into the highly regarded Dusseldorf Art Academy, where she eventually took master classes with German photographer Thomas Ruff. Kim began showing her own photographs while still a student in Germany, moving quickly from tightly cropped street shots centering on the back of young women’s heads (Faces with No Name, 2002) to female facial studies appropriated from an S&M club’s surveillance videos (Muses, 2004) and close-up studies of tattoos and unconventional body decorations (e.g., Geisha, 2006). Her consequent series, The Dinner (2005) and The Auction (2006) juxtapose men dressed in suits with women displayed nude for their delectation – respectively as items at a feast and a human commodity, symbolizing a social view of women in contemporary culture. Her best-known work to date is Saturday Night (2007) – a photomural featuring a grid of 66 rooms in a hotel, each with its private scene exposed through a “picture window” to the street. In 2008, In Sook Kim produced a photo series interpreting the psychological impact of various drugs.

FOTOFESTIWAL 2011 > EXHIBITIONS > MAIN PROGRAMME > OUT OF LIFE > IN SOOK KIM