In the images of Dutch photographer Ellen Kooi we are offered the hazy landscapes of the Netherlands – flat, wet fields that stretch as far as the eye can see, the streams that flow calmly between verdant banks and the wooded areas with their neatly-planted rows of trees. In these tranquil settings, laced through with a foggy and vaguely melancholic atmosphere, there occur minute events that are both mysterious and playful, but which subtly mar this orderly pastoral calm. It is as if in the photographs of Ellen Kooi there was always something going on behind the scenes: something ambiguous, some split that makes us to oscillate between enchantment and madness, or amusement and uneasiness.

The artist’s preference for skilfully orchestrated settings which she balances on a razor’s edge between normality and senselessness and playfulness and perturbation, is perhaps the result of her love of the theatre where she began her photographic career.

(excerpts from the article by Gigliola Foschi) 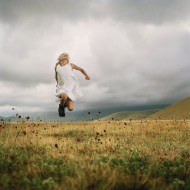 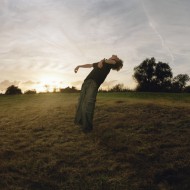 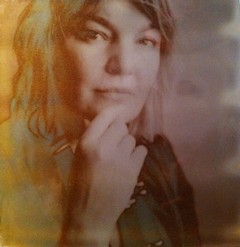 Ellen Kooi studied at Art Academy ABK Minerva and finished postgraduate studies in Art at the Rijksacademie van Beeldende Kunsten in Amsterdam. Having debuted as a theatre photographer, she treats her subject models like a stage director treats his actors.

Kooi is best known for her large-scale photographs of people set against the Dutch landscape, which seem to balance on the border between reality and fantasy. To enhance this effect, the artist often uses refined techniques that allow her to photograph landscapes in a way that we fail to see them – she carefully stages her panoramas and often uses the Hitchcock-style low point of view which forces the viewer to look at the scene from the ground level and creates in the observer the impression of intruding within a different world. The suspended unreality of the setting is further underscored by both the crystalline colours of the photographs and a strange cold light that seems to be emanating from some other magical place.

The artist’s most important exhibitions include Photographies (2011), in Le centre Image/ Imatge, Orthez, France and Out of Sight / Hors de Vue (2010), in Institut Néerlandais, Paris, France. Kooi’s works can also be found in numerous private collections. The last publication to include her photos is Out of Sight (2010) – 35 colour reproductions and essays by Bernard Marcellis and Frits Gierstberg – published by Filigranes Editions.