The series Paradise in Suburbia is an exploration of the relationships that people develop with places in their suburbs. The work is a window into a psychological space, where our experience and memory play a large part in how we perceive our surroundings. The images are taken in small areas of bush – tranquil pieces of paradise – that are in reality surrounded by houses and shopping centres. Here, there is an escape from the everyday into a world where mundane things still happen, yet we are in a land of symmetry and beauty. Our memory of moments lived create an alternative reality that we can visit any time.

In the areas where the image overlaps, there are layers of icons and strange creatures; the totemic images give the work a sense of foreboding and a depth that goes beyond an analysis of the physical and into the realm of our experience. Humans bring meaning to whatever space they inhabit; this space in turn becomes far more than a material reality, it becomes a treasury of stories and memories, both factual and embellished, both real and imagined. 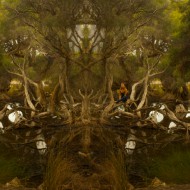 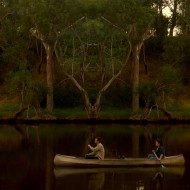 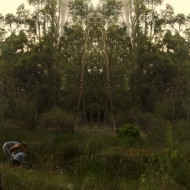 Rebecca is currently on the committee for the Perth Centre for Photography and is a lecturer in photography at Curtin University.

Rebecca’s work has been exhibited at the Australian Centre for Photography, Lawrence Wilson gallery, John Curtin gallery and at the Pingyao International Photography festival in China. She was selected to produce work for the Bon Scott Project at the Fremantle Arts Centre and she has exhibited twice in Berlin at the Berliner Kunstprojekt. She had a solo exhibition at the Turner Galleries in 2010 and recently a solo at MARS gallery and the Monash Gallery of Art in Melbourne.