Today, half of the world’s population lives in cities. Our perception of urban space and time has profoundly changed with the permeation of new information and communication technologies throughout the society. Zygmunt Bauman envisions a ‘liquid society’, where everything, including our fundamental human relations, is reduced to a state of flux. The city becomes an ‘e-topia.’ (W.J. Mitchell)

Green Memory is a city where useless computer parts cards are recycled into a new space. It is the brain, the nervous system of the urban space. In the heart of the city, seeds sprout between buildings enveloping avenues and submerging the city beneath. The plants’ triumph is absolute.

This work of art, Green Memory, creates a city within a city in the heart of Łódź, echoing the memory of the site and its mutations both past and future. 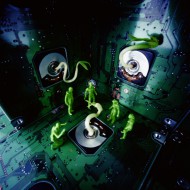 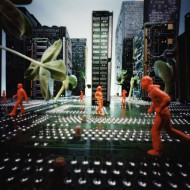 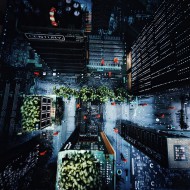 Pascale Peyret, photographer as well as visual artist, utilizes the ‘camera obscura’ for her photographic set-ups. She is moved by memory charged objects and is actively involved in the process of capturing mother nature through the world of growing plants.

She collects and recycles inert objects, attentively and precisely assembling them to create installations, then photographs the end result with her pinhole camera. The viewer is launched in a dreamlike vision with a poetic play on spatial dimensions. She completes her photographic display by creating living vegetable sculptures and a video capturing the transition through time.