Phyllis Galembo’s interest in the masquerade traditions of Africa and its diaspora began twenty five years ago, with her first visit to Nigeria. Since then, she has travelled widely in west and central Africa, and regularly to Haiti, making portraits that document and describe the transformative power of the mask. Her subjects are participants in masquerade events, both traditional African ceremonies and contemporary fancy dress and carnival, all of whom use costume, body paint and masks to create mythic characters – sometimes entertaining and humorous, often dark and frightening, and always powerful and thrilling. Titled after the Haitian Creol word for mask, Maske is the first comprehensive collection of these portraits. 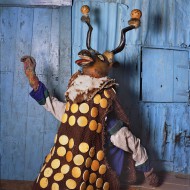 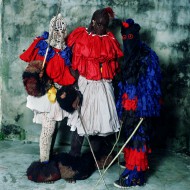 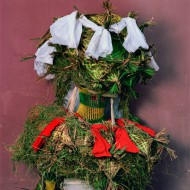 Phyllis Galembo graduated with a Master of Fine Arts degree from the University of Wisconsin at Madison in 1977 and has been Professor in the Fine Arts Department of SUNY Albany since 1978. She has had solo exhibitions at the Steven Kasher Gallery in New York City, the Smithsonian Museum of Natural History in Washington D.C., and the George Eastman House International Museum of Photography and Film in Rochester, NY.

Galembo has been photographing the characters and costumes of African masquerade for more than 25 years. Her books include Divine Inspiration from Benin to Bahia (1993), Vodou: Visions and Voices of Haiti (1998) and Dressed for Thrills, 100 Years of Halloween Costumes and Masquerade (2003), as well as her new monograph Maske (London, Chris Boot Ltd.), published in 2010. Her work is included in numerous public and private collections including the Metropolitan Museum of Art, New York City and the Museum of Fine Arts, Houston.