Minkkinen’s often surreal black and white photographs – orchestrated or set mostly in the landscapes, but also in the cities and towns, of the United States, Europe and his Finnish homeland – are never manipulated or digitally altered; rather they are direct recordings of what happened in front of the lens. “A wizardry that defies categorization” wrote Grace Glueck of the New York Times. As everywhere he sets up his camera, Minkkinen continues to explore the relationship between self and setting, between the light of the day and the timelessness of the moment. Nelson-Atkins Museum of Art curator Keith Davis writes, “As a whole, Minkkinen’s work represents a deeply personal dialogue with nature, an artistic meditation on the tensions between seeing and dreaming, union and alienation. 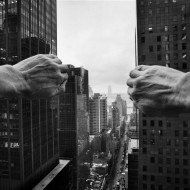 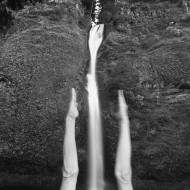 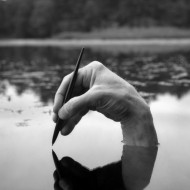 Arno Rafael Minkkinen moved to America with his family at the age of six. Working as a copywriter in New York, he began making self-portraits in 1971. Studying with Harry Callahan at Rhode Island School of Design, Minkkinen attained a Master of Fine Arts degree in 1974. Currently Professor of Art at the University of Massachusetts Lowell,he also serves as Docent at Aalto University of Art & Design Helsinki. His photographs have been exhibited throughout the world since the 1970s and are held in numerous museum and private collections.

Minkkinen was awarded a regional grant from the National Endowment for the Arts in 1991. In Finland, he was conferred knighthood by the Finnish government in 1992 and awarded the Finnish State Art Prize in Photography in 2006. The Finnish Film Foundation awarded him a Screenwriting Grant in 2010.