In the summer of 2010, I visited the Udmurtian people, who live in villages in central Russia. The Udmurts are a small ethnic group. They are very intensely connected to nature, and their natural environment plays an important role in all aspects of their life. Nature also has a religious meaning for them. They are not Christians, but have pagan rituals. Close to almost every settlement, you will find a special cluster of birches that is considered as a holy place. The Udmurts go there to say their prayers and worship the spirits.

When they invited me to their homes, I was pleasantly surprised by the nice, clean and colourful interiors. What struck me the most were the photographic wallpapers that were in practically every house, in their living rooms, bedrooms and kitchens. Many Udmurts proudly showed me wallpaper dreams that were still enrolled in their wrappings, too big to fit the walls.

In decorating the walls of their homes with photographic wallpaper, they found a way to materialise their dreams of faraway and exotic places, places they will never be able to visit but in their dreams.
My images show these wall decorations that have fully become part of the interiors, and, like the dreams of the inhabitants, have no clear boundaries. 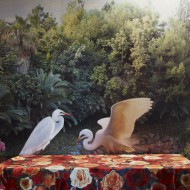 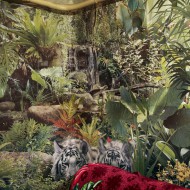 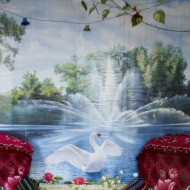 LUCIA GANIEVA
born in 1968 in Olenegorsk (Russia), lives in Amersfoort (the Netherlands)
www.luciaganieva.com 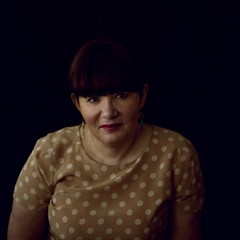 After receiving education in fashion, Lucia Ganieva started to study photography and graduated at the Foto Academie Amsterdam with an honours degree in May 2007.In the past years, her photographs have been exhibited in many places all over the world. In 2007, she won awards in the Dutch PANL contest (gold) and the IPA in the USA (1st and 2nd place) and was chosen for the Best of Show exhibition of the Rencontres d’Arles festival in France.

Her work has been published in a number of international magazines; in 2009 her first book was published, Tiltenberg by Mets&Schilt Publishers, Amsterdam.

Lucia is most successful with photographic series containing portraits of people in their environment. By means of portraits of people and their space, she wants to illustrate social issues. She makes most of her work in Russia, because of her roots and her strong connection with the Russian people and society.