born in 1972 Shanghai (China), where he currently lives
www.maleonn.com 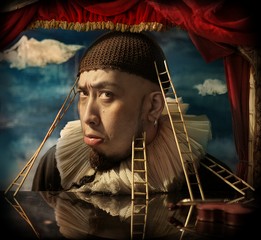 Maleonn grew up in a family of artists and studied fine arts for over ten years. He had been seeking how to best communicate through art until he decided to quit his career as a director of commercial videos in 2003 and took up photography as his means of expression. In 2004 Maleonn had his first solo exhibition in Shanghai, and in 2006 his works were presented in Toronto, which marked the beginning of his international career. Maleonn collects old photos and other historical objects, which influences a sense of nostalgia in his works. His works have been exhibited throughout China, North America, Australia and Europe including CO2 Gallery in Rome, Paris- Beijing Gallery in Paris and Beijing, CDS Gallery in Denmark, Mai36 Gallery in Zurich, Shanghai Arts Museum in Shanghai and Craig Scott Gallery, Toronto, Canada.