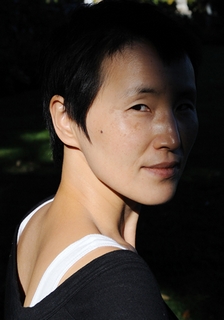 In Sook Kim left Korea in 1999 to study art abroad. She was accepted into the highly regarded Dusseldorf Art Academy, where she eventually took master classes with German photographer Thomas Ruff.

Kim began showing her own photographs while still a student in Germany, moving quickly from tightly cropped street shots centering on the back of young women’s heads (Faces with No Name, 2002) to female facial studies appropriated from an S&M club’s surveillance videos (Muses, 2004) and close-up studies of tattoos and unconventional body decorations (e.g., Geisha, 2006). Her consequent series, The Dinner (2005) and The Auction (2006) juxtapose men dressed in suits with women displayed nude for their delectation – respectively as items at a feast and a human commodity, symbolizing a social view of women in contemporary culture. Her best-known work to date is Saturday Night (2007) – a photomural featuring a grid of 66 rooms in a hotel, each with its private scene exposed through a “picture window” to the street. In 2008, In Sook Kim produced a photo series interpreting the psychological impact of various drugs.

(based on Richard Vine’s interview with the artist)