In the 21st century, the concept of spirituality is becoming increasingly important to various cultural discourses, including that of contemporary artwork. No one is no longer surprise that performances, paints or fashion refer to the sacrum and use religious symbolism freely. At the same time, while speaking about search for religious and spirituality in this part of Europe, one cannot omit the Catholic faith and the figure of Jesus and its role both in our lives and in visual arts. During the last week of Fotofestival, we will discuss this topic during discussions, film screenings and presentations of photographic books.

Tonight we will explore the issue of devotional articles and the cult of the image of Jesus. Let’s meet at 6:00 P.M. at the lecture entitled Shall we drive the temple traders away? Capitalism and sacrum in Medjugorie. Prof. Ewa Nowina-Sroczyńska from the University of Lodz, interviewing by Ada Florentyna Pawlak, will present an anthropological perspective on “holy cities” functioning in the spirit of capitalism.

The second lecture about the relations of sacrum and profanum will be held on 28.06 at 6 P.M. – Secular Sanctity and Saint Secularity, prof. Tomasz Majewski.

Face to face with Messiah

Have you heard about Jerusalem Syndrome? That some Jerusalem tourists believe that they are Messiahs or saints? If not, we would like to invite you to listen to the story about the beautiful city where religion vibrates like nowhere else. Katarzyna Kozyra and her movie will be our guide: Looking for Jesus (screening 27.06 at 7 P.M. in Art_Incubator). She will lead us to a meeting with the present “incarnations” of Christ, King David and Blessed Virgin. 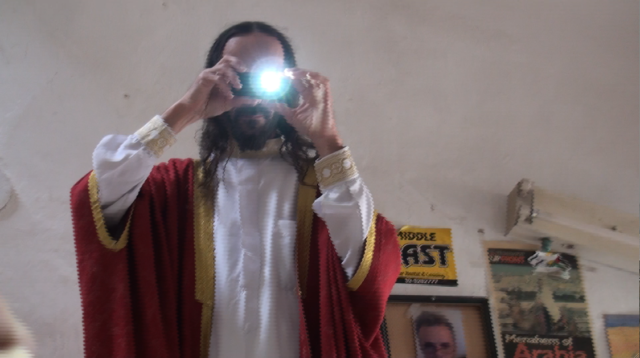 Interested in how religiousness manifests itself in photo books all over the world? We will explore this topic together with Adam Mazur and Łukasz Gorczyca at a meeting with Paweł Jaszczuk. Is it possible to photograph a religious experience? How to talk about spirituality through the format of a photo book? Is there such a thing as the history of religious photobooks? We will present hot examples from Poland, really lousy, but also brilliant ones. There will also be star-books including the Broomberg and Chanarin Bible. Last but not least: special guest of the Photoclub, Paweł Jaszczuk, who will prepare a special Japanese set for us. 30.06, 4 P.M. – Spirituality and mundaneness. Religions in photo books; Art_Incubator

Until the end of the week, you can also see an exhibition ¥€$U$ by Paweł Jaszczuk in the unique rooms of the Motyl UŁ building at 21 Sienkiewicza Street. The artist collected and photographed objects picturing Catholic saints: towel with the image of Madonna or a key ring-cross with a penknife, but also those more unusual like a duck for bathing with Jesus’ head or a bulb with a cross-shaped filament. What is the function of the images of Saints and God? What are the limits of devotion? Can devotion and holiness be mutually exclusive?

Fotofestival lasts until 30 June. We’re waiting for you!