Photography is a special medium in which the image is a creation of both the artist and the device itself. Janusz M. Tylman with Marcin Późniak took up the challenge to find out which photos, from a simple camera obscura or one of great wanders of technology,give better representation of human's perception of world. 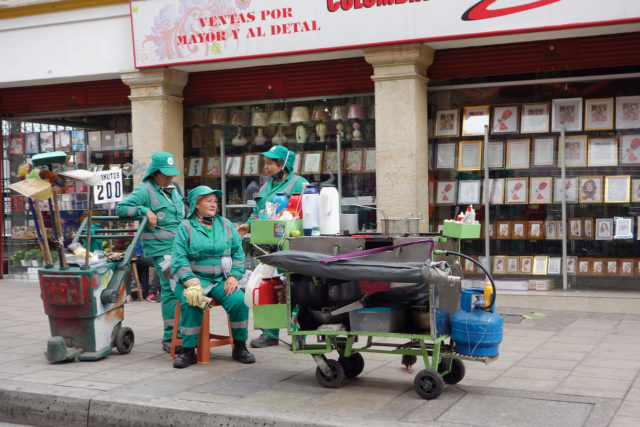 Photography is a special medium in which the image is a creation of both the artist and the device itself. Taking up, along with Janusz M. Tylman, a dialogue between a simple pinhole camera and a complicated electronic-mechanical marvel of technology, which SONY RX100 is, we tried to find out which method of describing the world, and, more precisely, Bogota, is closer to what we both understand as mimesis.
In both cases, the image is retained almost without our participation. In pinhole photography, it consists in a few-minute exposure of a black and white film, during which the image is generated slowly and depends on external factors, such as moisture or altitude above sea level. Photographs taken with a modern camera, with short exposure time and perfect optics, theoretically allow us to show the world in an almost perfect way. Which of these methods is closer to our initial presumptions? Both seem to be equally good. Pinhole photographs, with long exposure time, show a reality devoid of the temporary aspect. To increase the information capacity of the image, I recorded the streets of Bogota directing the pinhole camera to a selected object, but I added what was behind my back.
Marek Poźniak

Marek Poźniak (born 1960). Studies at the Higher School of Pedagogy in Opole. A graduate of the Higher School of Engineering in Opole, the College of Photography of the Association of Polish Art Photographers and the Ministry of Culture and Art in Warsaw. PhD obtained at the Academy of Fine Arts in Poznań. He ran classes in the basics of photography. The winner of the prestigious European Photography Award and the Medal of the President of Opole for creative work. A photographer, academic teacher at the Film School in Łódź. He also deals with graphics and computer typography. He is the author of photographic publications, his photos have also illustrated poetic books by several authors. He has been living in Berlin for a dozen or so years.